We conducted a randomised controlled trial to determine the effectiveness and cost-effectiveness of internet-delivered cognitive-behaviour therapy (iCBT) for depression and anxiety as it is routinely used within services. The results published in Npj Digital Medicine show that the intervention is effective as a standalone treatment for anxiety and depression in routine care settings. The positive effects were observed beyond the treatment period up to 12 months.

iCBT is routinely used as a treatment alternative within the Improving Access to Psychological Therapies (IAPT) of the National Health System (NHS) in the UK, so we decided to investigate the performance of this intervention within a service. Thus, this trial is unique in its nature since we built trial procedures around a fully integrated intervention to assess its effects in a real-world setting. In science, these types of studies are known as ‘pragmatic trials’ since it explores the effects of treatments as they are used within services. These types of studies are very important because they maximize the generalizability of the results to settings that use similar structures, so in this case, the results of this trial could be applicable to other clinical settings within collaborative care models.

IAPT is a stepped-care model, which means that patients are allocated to different treatments (steps) depending on their presenting needs. After a brief assessment with a clinician to determine the complexity and severity of a patient’s needs, they are allocated to an appropriate psychological intervention. Individuals who have mild to moderate presentations of depression and anxiety are allocated to step 2 of IAPT, where iCBT is offered as a treatment alternative with support from a qualified clinical practitioner, called a Psychological Wellbeing Practitioner (PWP). The stepped care model helps to increase efficiencies for a service and ensure that they can have greater access to a range of evidence-based treatments. 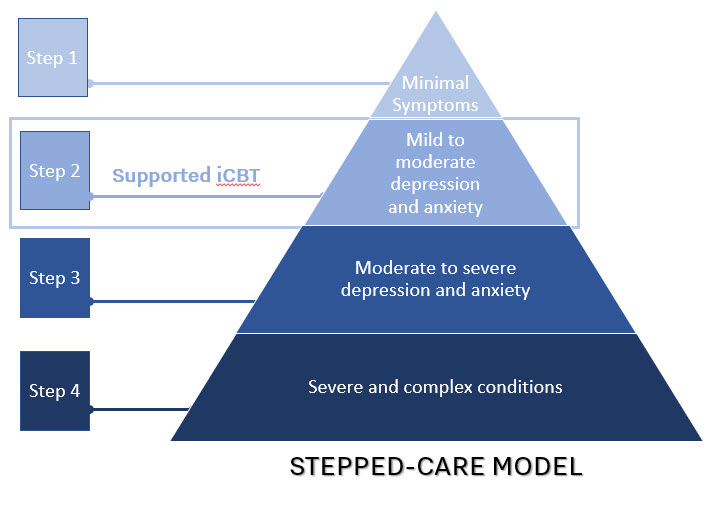 We offered participation in the trial to all patients assigned to iCBT as their primary intervention within step 2 of IAPT. In total, 361 patients were randomly allocated to the iCBT group or a control group, in which participants had to wait for 8 weeks before receiving treatment. This design allowed us to compare the effects of the iCBT intervention relative to the absence of treatment. We measured symptoms of depression and anxiety in both groups at baseline and 8 weeks later to determine the effectiveness of the intervention. Likewise, we also assessed general health status and the extent to which these patients used other healthcare services to investigate if the intervention was cost-effective.

To dig deeper, we explored the maintenance of gains over time with intervention group participants followed up to 12 months later. Furthermore, clinicians conducted neuropsychiatric interviews with the patients at baseline and 3 months later to determine the presence of depression and anxiety diagnoses.

The results showed that the intervention was effective at reducing symptoms of depression and anxiety compared to the control group. Moreover, those in the intervention group kept improving over the 12-month follow-up . 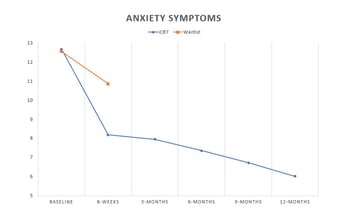 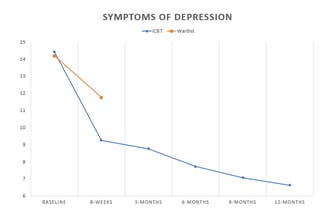 The results of the neuropsychiatric interviews showed that 56% of participants did not meet diagnostic criteria for any mental health disorder at 3 months after beginning treatment.

The results of this trial confirm that iCBT is an effective intervention that can be administered as a standalone treatment for depression and anxiety disorders within routine care settings. The observed long-term benefits for up to a year after the start of treatment supports the notion that these improvements consolidate over time. The study underlines the benefits, from an accessibility and cost-effectiveness standpoint, of including digital interventions as part of routine clinical care.

iCBT during the pandemic

The findings of this research study are especially relevant in the context of the current pandemic, where healthcare services are being pushed to the limits of their capacity. Many studies are showing the massive impact that this pandemic is having on people’s mental health and already strained healthcare providers. ICBT can play an important part in complementing current services, increasing their reach and capacity and to support and treat more people. To quote Dr. Derek Richards, chief investigator of the project, “Due to its results on long-term improvement, recovery and cost-effectiveness, at a time of increasing demand for psychological and behavioural healthcare, digital mental health care should be viewed as a standard part of psychological support and no longer simply as an innovative approach”. 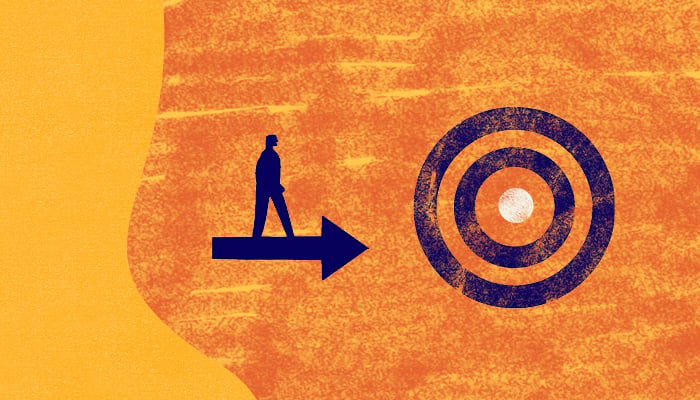 Usage and Outcomes – What’s the Right “Dose” for Patient Engagement?